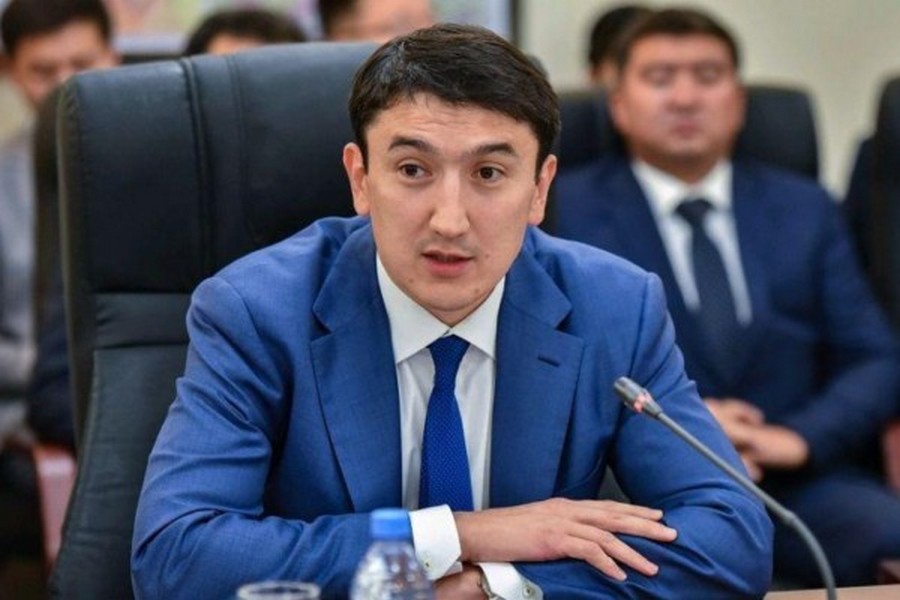 A year ago geological industry management underwent serious changes in Kazakhstan. A new state body - the Ministry of Environment, Geology and Natural Resources - was created, and the issue of the development of geology received higher status. In an interview with Interfax-Kazakhstan, Minister of Environment, Geology and Natural Resources Magzum MIRZAGALIYEV talked about the industry’s plans, risks and opportunities in the face of the crisis caused by the COVID-19 pandemic, the prospects for new discoveries and much more.

- Magzum Maratovich, the ministry you are heading up was created a year ago, and the development of geology was among its tasks. The country's leadership instructed the [ministry] to devise a strategy for the development of the industry, and the concept of the state program has already been approved. Is the COVID-19 pandemic very likely to make its adjustments to industry plans? Do you agree with the opinion that not the best times are coming for geology?

- The outbreak of COVID-19 has led to an unprecedented collapse in demand in global oil markets this year. Nevertheless, the OPEC + agreement had a positive effect on the change in the oil price forecast in the short term. Against the backdrop of such trends, capital investment in exploration and production has declined globally. So, if in 2014 the total volume of capital investment in the world amounted to $ 700 billion, then already in 2020 this figure is projected at $ 400 billion. Under such conditions the competition for new investments in exploration and production becomes even more intense. According to the forecasts of the research and analytical company IHS Markit, capital investment in exploration and production in 2021 will decrease by 25%-60%, but at the same time beyond 2022-23 this market is likely to begin its slow recovery.

This crisis is deeper, the drop in prices is underway not only for oil and other energy resources, the total consumption is decreasing.

In such a situation, of course, support is needed in order to avoid laying off people and widespread unemployment. In this sence, the devised state exploration program for 2021-2025 should become a driver for the industry in the long term. Achieving the indicators set out in it is the key to the country's economic security in the future. In addition to all that, its implementation will provide employment and, accordingly, income for people. To this end, no adjustments are planned for the program.

- Will the state program financing be reduced?

- At this stage, the reduction of funds for the geological exploration of mineral resources is not expected. The program is already being shaped given the current market situation, therefore, we do not expect significant adjustments.

- Specify how much budget funding is to be directed towards implementing measures envisaged in the state program?

- The program has been devised for five years, during this period, according to our estimates, about 1 trillion tenge (405.77 tenge/ $1) will be invested in the exploration development. Speaking specifically about public funding, we are talking about 153 billion tenge for five years. This money, first of all, will be directed towards conducting the early stages of exploration, such as regional exploration, prospecting, prospecting and evaluation, this is when the work is carried out in large areas, while the probability of discovering a deposit at these stages is low. Nevertheless, we set ourselves ambitious, but, I think, quite feasible tasks to discover up to 50 potentially promising areas of mineral resources. Further this will be the good groundwork for attracting investment. As international experience shows, investors invest in field exploration in those countries where the state has already carried out or is carrying out the early stages of work at its own expense, where the basis of promising areas with forecast resources has already been formed up. Therefore, here in Kazakhstan, it is important now to carry out this work at the expense of the national budget. Each government tenge invested in geological exploration will fetch us up to 5 tenge in private investments in geological exploration, and this is about 800 billion tenge.

- Is it realistic to implement plans to attract investment to exploration in the new realities?

- We are well aware that, of course, there is a certain risk, but I believe that today Kazakhstan has created fairly good conditions for attracting investment. First of all, this is a big raw material potential. We have 15 sedimentary oil and gas basins, some of them are poorly studied, but, according to our geologists, have a good chance to discover new deposits. Secondly, the availability of developed oil and gas transportation infrastructure with the opportunity to access global markets, qualified HR potential, and the fact that we are going to carry out early stages of geological work at the expense of the national budget, as a result of which it is planned to reveal promising mineral deposits. Therefore, I can say that the task set to us is feasible.

- In February, the Cabinet approved the concept of the state program of geological exploration for 2021-2025. The state program itself, as planned, [was] to have been devised and approved by May 2020. Has the time frame been pushed forward?

- To date, the state program has been devised, agreed upon with state bodies, non-governmental organizations, geological associations and will be approved in the near future.

- Tell [us] about plans to give [National Geological Exploration Company ] Kazgeology the status of the national operator. Some industry participants consider that this step will monopolize the industry, and the company will lobby itself for the entire public budget for exploration.

- Yes, for the time being this issue is being actively discussed, but there is no concrete solution yet. Initially, the idea of ​​giving status to the so-called national operator belongs to many veteran geologists and prominent figures in industry. Afterwards, these amendments have been set out in a bill initiated by the group of the members of the Majilis (the lower chamber of Parliament).

There are a lot of prerequisites for this: this is the significant depletion of mineral reserves, the need to move over from the existing model to a scientifically based approach to studying the subsoil, the need for multi-client studies of poorly studied basins, the rational use of public funds, etc.

The choice of Kazgeology is not accidental. This organization, among other things, was created specifically for the government geological research into the subsoil. Currently, Kazgeology is already doing about 22% (17 out of 80 facilities) of work carried out at the expense of the national budget. The remaining part of the work is carried out through public procurement.

Kazgeology has modern high-tech equipment, is employed with high-class specialists and provides for an integrated approach to the geological study of mineral resources, including geological exploration and the introduction of new high-tech and effective technologies.

As you can see, the issue is very sensitive, and requires a comprehensive analysis. The discussion of the issue is ongoing.

- At the end of last year, you informed of oil manifestations in Turkestan region. What work is being done there now? Is it possible already to speak about probable reserves?

- No, it’s impossible to even talk about probable reserves, especially about reserves, without carrying out comprehensive work. The discovery of an oil manifestation in the Leontiev depression in Turkestan region is not accidental; in this region, our geologists single out two sedimentary oil and gas basins, the Shu-Sarysu and the Syrdarya, whose potential is still poorly studied, but according to available data, is very significant.

Therefore, this year, geophysical studies have already begun in the Shu-Sarysu sedimentary basin, and will begin in the Syrdarya basin in 2022.

As for this concrete block then we have provided for the exploration of the area as part of the state program. Designs for comprehensive geological and geophysical research are already being worked out. The work is scheduled to begin in 2021.

- It is no secret that in the medium term several industrial cities may be under threat of closure due to the depletion of mineral resources. What measures are being taken to avoid this scenario?

- Given that many deposits were discovered at the beginning of the 20th century, indeed, currently the level of mineral reserves near industrial cities and single-industry towns is critically low.

One of the tasks of the state program is to replenish the mineral resource base and work with current investors, that is, not only attract new ones, but also prop up active subsoil users. Therefore, when devising the state program, the needs of industrial cities and single-industry towns were taken into account. In particular, it is planned to conduct geological exploration near single-industry towns such as Altai [formerly known as Zyryanovsk] , Ridder, Serebryansk in East Kazakhstan, Zhezkazgan, Satpayev in central Kazakhstan, activity in the Torgai [area], etc. As a result of this work, we expect to discover potentially promising sites and carry out the evaluation of undiscovered mineral resources and attract subsoil users to the further exploration of the area.

- Not so long ago you posted on Twitter that you were preparing a strategy to attract major investors to geological exploration, planning a road show to present the country's geological potential. What time frame is the road-show planned for? In which countries, on which platforms? What blocks will be presented? Is there currently an interest on the part of major market players in blocks?

- The СOVID-19 situation and its effects have badly impacted the global demand for raw materials. And investors, obviously, are reluctant to invest in prospecting, or they do it very neatly and economically. Understanding the problem is one thing, and being able to implement it – that is something different. Therefore, the question arose of the need to attract a consulting company of a worldwide reputation and opportunity, since right now we need to be able to come up big from the perspective of investment. Kazakhstan’s total recoverable hydrocarbon resources are estimated at 76.4 billion tonnes of oil equivalent. As I said, we have 15 sedimentary basins, 5 of which have been developed, 5 are showing little promise, and prospects have yet to be studied on 5 poorly studied basins.

We plan to attract a company with a worldwide reputation and an impressive client base in order to study and unravel the potential of these sedimentary basins, devise the marketing strategy to attract major foreign investors as partners. We have already held the first negotiations with such a company - this is IHS Markit, based in the UK and the USA. We have agreed to set up a joint working group, which will soon analyze the country’s investment opportunities, as well as roadshows are planned. Kazakhstan has already good experience on this matter, first roadshows were carried out by our country yet in 1992 in Houston. Then first investors were attracted to geological exploration, as a result, the Chinarevskoye oil and gas condensate field was discovered. In 1993, a similar roadshow was held in Houston and then in London, where it was proposed to explore the Caspian [Basin] prospects. A consortium of companies was established, which are among the five world leaders in the oil and gas industry. The result of the work is known all over the world: in addition to the Kairan, Aktoty, Kalamkas-Sea and others oilfields the unique Kashagan field was discovered.

The current roadshow is to be organized at four locations. One of such venues will be Houston - the leading global center of the energy industry. This city hosts international energy conferences annually, offices of more than 800 foreign companies and nearly 430 major American companies are situated over there. It’s difficult to find a venue more suitable than this one. Also, it is planned to visit London, Singapore and Dubai as part of the roadshow.

The roadshow is scheduled for the 4th quarter of this year and the 1st quarter of 2021.

- Thank you for the interview.


July, 2020
© 2022 Interfax-Kazakhstan news agency
Copying and use of these materials without reference to the source is prohibited