Interview with Alina ALDAMBERGEN, Chairperson of the Management Board of the Kazakhstan Stock Exchange:
PUBLIC INTEREST IN EXCHANGE TRADING INCREASED AFTER THE STOCK MARKETS DECLINE AGAINST THE BACKDROP OF THE PANDEMIC IN MARCH-APRIL 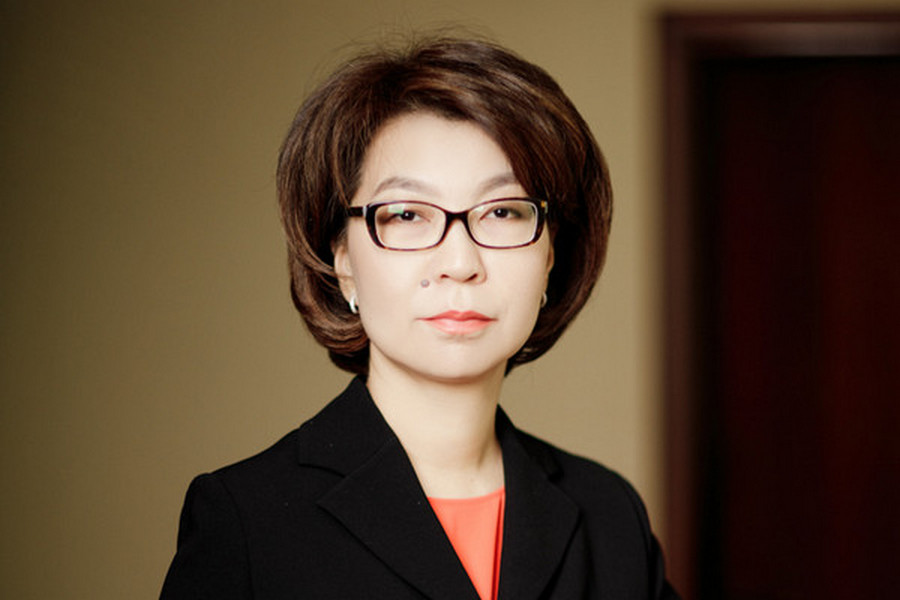 The trading volume on the Kazakhstan Stock Exchange (KASE) decreased to 85.6 trillion tenge in all market sectors in January-September 2020, while the share and government securities market increased. What caused the expansion of these markets? Alina ALDAMBERGEN, chairperson of the KASE Management Board talked in an interview with Interfax-Kazakhstan whether retail investors’ activity increased and how the pandemic affected Kazakhstan’s stock market.

- Alina Utemisovna, in the opinion of many people, the year has turned out to be uneasy. What results can be summed up in the domestic capital market for the [first] 9 months?

- We observe that in the [first] 9 months the trading volume in all the KASE exchange markets decreased slightly, down 5.3%. It is noteworthy that the number of deals increased by 35%.

The trading volume decline in one sector was offset by the growth in another. A shift in the placed liquidity volume from the corporate sector to the state sector took place due to a significant volume of bond primary placements by Kazakhstan’s Ministry of Finance and regional administrations as part of the implementation of the state support programs (government securities of the Ministry of Finance, regional administrations).

Thus, from the beginning of the year the volume of Kazakhstan’s securities market trading increased by 22% to 5.2 trillion tenge compared to the same period in 2019. The number of deals also exceeded the indicators for 9 months of the previous year by 1.7-fold. More than a 2-fold increase in government securities to 3.6 trillion tenge was recorded. The primary market accounted for 79% of trading , the secondary market for 21%. The volume of commerical transactions with shares increased by 37.2 billion tenge to 155.3 billion tenge or a 31.5% increase, of which 98% of trading involved the secondary market. An increase in demand for securities of investment funds was also noted. For the 9 months of 2020 the trading volume amounted to 10.1 billion tenge and up 18-fold from the same period in 2019, which is a record for our platform in the whole history of this sector.

- How did the forex market behave?

- Within 9 months, the volume of foreign exchange market trading contracted sharply in April-May, but there was a recovery in trading from July with the total volume amounting to 8.4 trillion tenge or a decrease of 1% compared to the same period last year. As of October 1, the tenge depreciated by 12.8% against the US dollar. The maximum value was fixed at 448.52 tenge on April 1. As of October 1 this year, the [tenge] /US dollar exchange rate decreased by 3.7% compared to its peak value on April 1. The peak of the daily volatility fell on the first month of the economic crisis from early March to early April, when the daily volatility of the dollar/tenge _TOM tool was 1.9%. For comparison, the same indicator in February did not exceed 0.26%, which was 6.5-fold less than at the peak in March. Historical volatility for the dollar / tenge pair with ‘tomorrow’ 2019 calculations was at 0.23%. Compared to the other emerging markets with commodity-oriented economy, our national currency was not exposed to such strong devaluation from the beginning of the year (for example, the Russian ruble depreciated by 26%, the Turkish lira by 30%, and the Brazilian real by 41%).

The money market trading volume decreased by 5.6 trillion tenge or down 7%.

- By and large, what stock market instruments are in demand in the current situation?

- This year the volume of supply by the corporate sector has decreased compared to last year, but the volume of government securities has grown significantly what is explained by two lockdown periods and the suspension of economic activity. The main investors in the secondary government securities market were second tier banks (35.7%), other institutional investors (brokers, insurance organizations, UAPF, investment funds: 52.8%), other legal entities (legal companies - clients of brokers: 11.5%), participation of non-residents in the secondary market is estimated at 2.1%.

- In your opinion, is the popularity of government securities linked with what?

- The popularity of government securities among institutional investors is due to the fact that the purchase of this type of securities corresponds to their level of appetite and risk tolerance, as well as a longer-term investment strategy. In cases of increased risks (credit , interest rate, liquidity risks), this financial asset can be sold in order to obtain cash liquidity. In addition, bonds with ratings above B- on Standard & Poor's international scale or on a similar scale of other rating agencies are used as repo transaction items. In turn, this allows participants to receive temporary cash liquidity, without suspending the recognition of an asset on the company's books.

Stocks, ETFs and mutual funds are popular among individuals. The demand for shares is explained by the possibility of receiving faster income, compared to bonds, due to increments in their value and dividends. The popularity of ETFs and mutual funds is determined by lower investment risks and an asset affordable entry threshold. In addition, they often do not require an in-depth market analysis from an investor - the management funds take full care of assets. In the past three years of trading, the participation of individuals in the collective investments and shares market has reached around 50% of the market turnover, which is a high indicator.

- What instruments were most in demand?

- In the first 9 months, the highest demand by among individuals by type of securities fell on shares (61%), securities of investment funds (23%), debt securities (14%) and government securities (2%). In terms of trading volume and the number of transactions, the most popular are ordinary shares of Halyk Savings Bank of Kazakhstan JSC (6 billion tenge - 30,236 deals), KazTransOil JSC (2.2 billion tenge - 21,818 deals) and KAZ Minerals JSC (2.1 billion tenge – 13,130 deals). In general, individuals KASE Index basket purchased ordinary shares worth 66% of the total volume of shares in the reporting period. Primary Placement Fund LLC Managing Company East-West is the most popular in terms of the number and volume of deals (6.9 billion tenge - 742 deals) among investment funds. SPDR S&P 500 ETF TRUST and ETF stakes managed by FinEx Investment Management LLP on the basis of KASE Index are also popular.

- What are the current dynamics of government securities placements?

- This year the National Bank and Kazakhstan’s Ministry of Finance actively took measures to stimulate investors to participate in the domestic public debt market. This contributes to more market-based creation of a risk-free yield curve. As at October 28 this year, the state debt at par, traded on KASE, amounted to 16.5 trillion tenge ($ 38.3 billion) or an increase of 3.5 trillion tenge since the beginning of the year or up 26.8%.

The offering of municipal bonds of the regional administrations with the aim of financing housing construction [projects] as part of the implementation of state and government programs accounted for about a quarter of the primary public debt market. With the aim of implementing the Nurly Jer housing and utilities development state program for 2020-2025, the administrations of 14 regions and the mayors’ offices of the cities of Nur-Sultan, Almaty and Shymkent raised 672.4 billion tenge compared to 87.8 billion tenge in the same period in 2019.

- During this period, we observed the retail investors’ activity in the stock market. What is a picture regarding the retail business now, if one compares prior to and the post lockdown time?

- In your opinion, with is this tendency linked what?

- A similar trend, namely growth in the retail investors’ activity was observed not only in Kazakhstan, but worldwide. Mainly, public interest in exchange trading increased due to the investors’ desire to buy assets, which became cheaper after the decline in stock markets amid the pandemic in March-April this year. Shares of promising companies fell significantly in price due to uncertainty caused by the impact of the pandemic on the economic situation. In addition, in the aggregate, growth, availability of more free time, active marketing by brokerage firms , as well as availability of remote access technologies for opening a trading account had an impact on the rise of the number of retail investors.

At the same time, the growth of the investor base has not yet completely changed the situation with retail investment in the country. At the end of March, 1.4% of Kazakhstan’s employed population could be called retail investors in the stock markets. This figure was 1.3% in 2019, at 1.2% in 2015, at 0.1% ten years ago.

The biggest impetus for the development of retail investment in the last 10 years has been provided by IPOs. However, this year, the positive trend in the growth of retail investors has been shaped precisely by citizens’ interest in the stock market and its investment opportunities, which is extremely important for the development of investment culture and financial literacy enhancement among households. The average number of accounts opened per month was 1, 113, which is almost twice as high as the monthly average in recent years. In the months not preceding any large securities offerings, on average, individuals, open 500-600 new trading accounts, close nearly 210.

- What tools does the retail business pay attention to?

- As for the retail investors’ preferences for the selection of investment instruments, then, as I already mentioned to you, the lockdown period has even more increased our citizens’ interest in shares. This is due to the fact that during the periods of crises, stock markets are susceptible to big volatility compared to the raw materials, forex and corporate bonds markets. Thus, investors expect to get higher returns on stocks thanks to the purchase of an asset after a price drawdown and a later sale after a share price recovery. In addition, dividend payments are an important factor for the popularity of stocks among retail investors, which help fix even higher returns in a short period of time. This year the KASE Index most issuers, as well as the Russian stock market blue chips offered higher dividend payments than last year additionally stirring citizens' interest in investing in this instrument. This trend is confirmed by the fact that investors, who opened an account in 2020, made about a third of deals with regard to the top 10 most traded stocks in 2020.


November, 2020
© 2022 Interfax-Kazakhstan news agency
Copying and use of these materials without reference to the source is prohibited