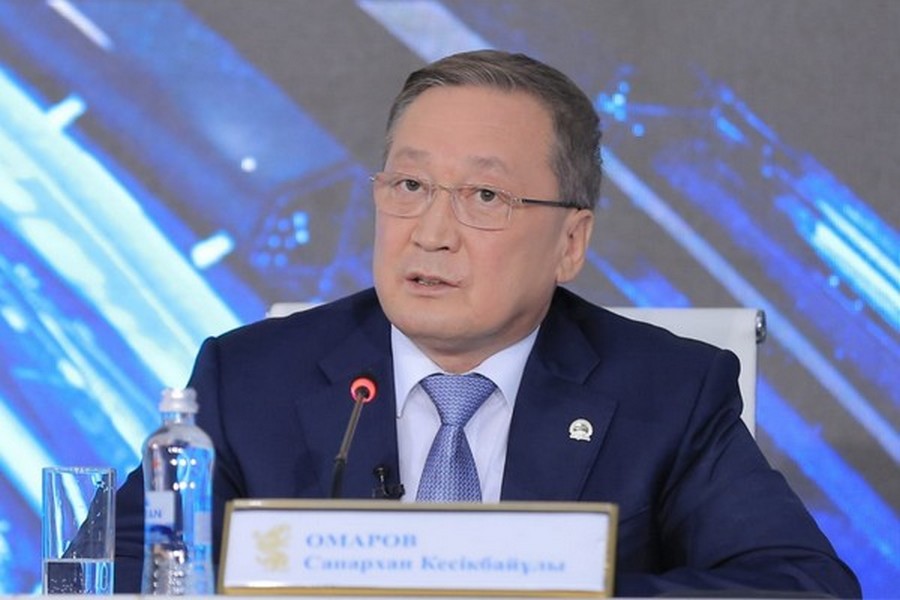 The coronavirus pandemic and restrictive measures introduced in the world have not had a significant impact on Kazakh grain exports. As planned, in this marketing year (July 2019 - June 2020), Kazakhstan exports about 8 million tonnes of grain and flour in grain equivalent. Agriculture Minister Saparkhan OMAROV told Interfax-Kazakhstan about what support measures were provided to farmers in the face of restrictions due to COVID-19 and whether it is planned to re-introduce quotas for the sale of agricultural produce abroad.

- Saparkhan Kesikbayevich, how did the pandemic, state of emergency and lockdown introduction affect the agro-industrial sector in general? Talk through measures to support the industry amid the pandemic?

- In Kazakhstan’s agricultural sector the situation remains stable despite the crisis due to the coronavirus pandemic. In the first five months of the year gross agricultural output increased by 2.2% and food production rose by 2.3%.

The government allocated an additional 60 billion tenge (403.58 tenge / $1) to support domestic agricultural producers. Here are subsidies for investment, interest rates on loans and leases of agricultural machinery, subsidies as part of guarantees and insurance of loans for agricultural entities, the development of animal husbandry and support for crop production.

In addition, measures were taken to replenish the farmers’ working capital through affordable financing. Under the Ken Dala program, about 2,500 farmers received 70 billion tenge for spring fieldwork. The Economics of Simple Things program envisages loans for projects aimed at production operations in the agricultural sector. In addition, 400 billion tenge was allocated from the budget. 100 billion tenge of this funding was also transferred to farmers for sowing due to the introduction of the state of emergency on the [Kazakh] president’s instruction.

- In order to provide Kazakhstani citizens with essential food items quotas on agricultural exports were introduced. On June 1 they were canceled. What result did this measure produce?

- As it is known, due to the spread of the coronavirus pandemic, the introduction of the state of emergency and lockdown both in the country and elsewhere worldwide, the demand for grain and flour, as well as for other food products, has abruptly increased.

In such a situation, we were forced to resort to such an unpopular measure as the introduction of a ban and quantitative restrictions on exports of certain items. These temporary measures were aimed exclusively at maintaining the country's food security and preventing essential foods mass “exodus” from Kazakhstan.

Given that early ripe vegetable crops are expected in May-June as part of the new harvest, as well as due to requests from the agricultural producers themselves direct for these types of goods, the ban was lifted.

Introduced bans and quotas yielded results, we came closer to a new crop harvest and leveled food security risks. With about 2-3 months to go for the new harvest we do have a reserve stock for that.

In addition, thanks to the measures taken in time, the regional stabilization funds have stockpiled a sufficient supply of flour and other food products. Also, food stocks are available in warehouses at shopping facilities and agricultural processing enterprises.

- Will new quotas be introduced due to the fact that a new spike in the COVID-19 incidence is predicted in the autumn?

- It is now premature to forecast in advance what measures will be taken in the autumn. Everything will depend on the level of food supply the country will have at that time. At the same time, it should be noted that in the autumn a new crop will be harvested, the average annual volume of which, as practice shows, would be sufficient to cover the domestic needs of the republic.

- In Kazakhstan, an initiative was announced to create the set of wholesale distribution centers in all regions of the country. At what date is it planned to implement this project? How will this system work?

- Yes, now this work is carried out by the Ministry of Trade and Integration. I note that the choice of a set of infrastructure content and the location of each specific wholesale distribution center will be based on geographic specificity, proximity to production and consumption centers, as well as on the characteristics of the region.

By and large, such centers, in our opinion, will maximize the development and increase of farmers' income on the spot. Thanks to direct access to wholesale distributors, the cost relating to the search for distribution channels will be reduced. Farmers will be able to directly interact with wholesale buyers without participation of middlemen, which will directly help producers have higher profits. One-stop services for initial processing, sorting, packaging of goods, certification and quality controls of produce will lead to a reduction in the production cost. A decrease in storage losses is also expected.

The better knowledge of market conditions will result not only in a fair product market sale price but will also allow better planning of volumes and types of fruits and vegetables, developing the farmers’ own production facilities, and quickly adapting production operations to market requirements for produce being sold.

- Will agricultural produce sales markets be expanded this year? If so, in which countries?

- For 2020 the Ministry of Agriculture plans to continue expanding its product line relating to foreign markets. Work with China will continue on expanding the register of exporters of poultry products, chilled meat, semi-finished products, peas, lentils, and rape. There are plans to identify new markets in the European Union in terms of honey and dairy products. We plan to export livestock products to Turkey, Japan and countries in Southeast Asia.

- Did Kazakhstan manage to fulfill all export obligations regarding grain amid the pandemic? What is the plan for grain exports in the current marketing year?

- Exports of grain crops in the current agricultural year has already amounted to almost 8 million tonnes. There will still be some volume until the end of June.

Given that the average annual grain and flour exports for the past 10 years have been 8.5 million tonnes one can state the fact that the measures introduced in the spring to limit exports of grain and flour had practically no impact on export volumes.

- How did the spring fieldwork in the regions go? What is the outlook for the grain harvest for this year?

- Currently, crop sowing is completed in all regions of the country. The weather was favorable. On our part, all-out support was provided to farmers as quickly as possible, starting with consultations from scientists and lending, ending with the supply of new equipment and providing green corridor in order to pass through checkpoints, since sowing in the country took place under lockdown and emergency conditions. Thanks to this, the farmers managed to start and finish all fieldwork on time.

The Agriculture Ministry expects [this year’s] harvest to be no lower than last year. We try to be cautious about doing forecasts. Yes, sowing went better than expected, but there are still a number of important factors that directly or indirectly affect the crop: weather during the time of growing seedlings, ripening and harvesting, farmers' compliance with agricultural technologies, the effectiveness of protective measures, and so on. If the farmers harvest in time, the harvest could reach 18.5 million tonnes.

- As it is known, in Turkestan region, due to the collapse of a dam in Uzbekistan, almost 4,000 sown areas remained under water, and most of them were planted with cotton. Are the farmers' losses calculated and do [the authrorities] intend to compensate them?

- According to the Turkestan regional administration the sown areas in the Maktaaral and Zhetysai [rural] districts were flooded. In total, crops in an area of 7,600 hectares - cotton, alfalfa, corn, cabbage, peaches, melons and watermelons – were left under water. As a result of flooding, about 1,000 agricultural producers were affected, the amount of damage amounted to 3.5 billion tenge.

The possibility of allocating funds to pay compensation to the affected farmers in the region is currently under examination. I think that in the near future the issue will be resolved positively.

- The Maktaaral [rural] district is the only one in our country where cotton is sown. This year, is what harvest to be gathered ? Will export commitments be fulfilled this year?

- According to preliminary information from the Turkestan regional administration, to date 118,000 hectares have been sown with cotton, or at the level of last year. In 2018, more than 46,500 tonnes of cotton fiber were exported; in 2019, exports amounted to 65,400 tonnes. This year, cotton fiber exports are planned at the level of last year. We expect all cotton export obligations to be fulfilled.

- Please voice your forecasts for the development of the agribusiness sector in the context of economic recovery? What areas of agriculture remain attractive for investment?

- The government approved the Comprehensive Plan for Restoring Economic Growth, which also included measures aimed at supporting and developing agriculture, which, in the first place, will help us resolve issues of affordable financing for farmers.

Thus, the introduction of guaranteed procurement practices will secure the acquisition of up to 365,000 tonnes of agricultural produce. Soft micro loans for agricultural producers at a rate of 6% per annum through the KazAgro holding using the Damu guarantee tools will make it possible to ensure the availability of financing, thereby increasing coverage.

The introduction of a tool such as “agricultural receipts” will allow directly attracting non-bank and trade financing. The estimated amount of financing will be 200 billion tenge annually with a growth potential of up to 70% of the annual amount of financing in agriculture. It is also planned to provide loan deferrals and restructuring and lease agreements for farmers through the KazAgro holding.

In addition, measures have been taken to provide raw materials for our manufacturers. So, the areas under highly profitable crops - oilseeds, fodder and vegetable-melon crops - have increased. This year, areas sown to oilseeds have been increased by 122,200 ha, to buckwheat - by 30,900 ha, to fodder - by 308,600 ha and to vegetables, watermelons and melons - by 11,500 ha.

With the aim of developing the raw material base, increasing the load of processing enterprises and boosting the volume of exports of processed produce, we also plan to make amendments to the regulatory legal acts providing for the possibility of subsidizing oilseeds to be processed.

In order to reduce the production cost of priority crops it is planned to work out with the EAEU the issue of resetting customs duties to zero by the end of 2020 on components and spare parts for agricultural producers, a number of raw materials for the confectionery and sugar industries, juice production, equipment and components for industrial greenhouses.

In general, by 2025 we plan to completely resolve the import substitution issue. To do so, it is planned to attract about $ 4.1 trillion to the industry, which, first of all, will be directed towards implementing projects in priority areas: the construction of meat poultry farms, meat processing plants, intensive gardening cultivation and construction of sugar mills. In conclusion, I note that the agribusiness sector does not stand still and is developing steadily even amid the pandemic.

- Thank you for the interview.


June, 2020
© 2022 Interfax-Kazakhstan news agency
Copying and use of these materials without reference to the source is prohibited